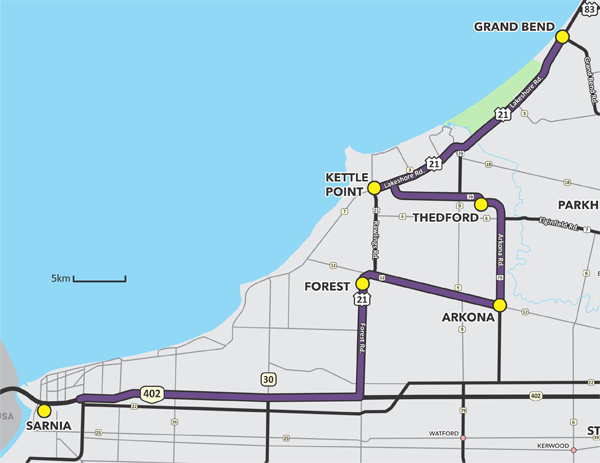 Sign up to get alerts about bus delays, schedule changes, cancellations, road closures and any other items that may affect your ridership experience.

Send us your comments or concerns using the Report It Form on the Municipality’s website.

New Weekend 2022 schedule for London to Grand Bend with 2 extra runs to the beach!

This service is amazing. Despite finding myself stuck in the city w/o my car or valid driver's lisence since June, with only a few stops I am now able to see my daughter once again! Thanks a ton guys!! 🙏💙

I wish there were similar services on other parts of Ontario.

I think a different one stops there Anna. The one from Sarnia i think. Then goes ti the bend?

Does it no longer stop outside of Port Franks at McPhersons?

Is your ride 30 minutes away? Or 30 seconds? Find out in real time with @transitapp. Just tap your transit line to watch your Huron Shores Area Transit bus approach, on the map!

Due to a mechanical breakdown, there will be no service today August 08, 2022 on Route 3 Grand Bend to Goderich and Goderich to Grand Bend.

We apologize to passengers for this inconvenience. Kindly stay tuned for the update. ... See MoreSee Less